President Obama On Black Hair and the Pressure on Appearance 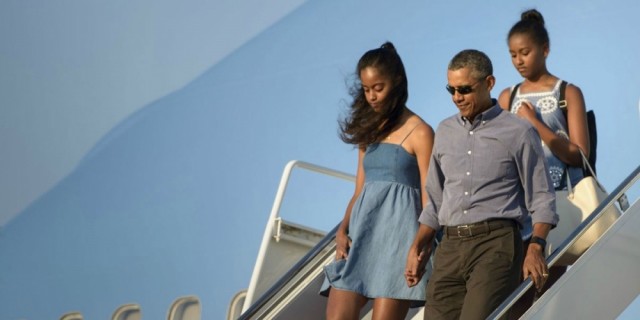 There you have it. President Obama has just acknowledged the real pressure that women, especially African American women, feel surrounding their hairstyle choices.

How did that happen? It was part of a newly filmed Time magazine interview in which he and ballerina Misty Copeland discuss race, gender and success. During the interview, somehow their conversation veered into beauty-related territory and eventually black women's hair choices.

Specifically, Obama says he's finally fully appreciating "the enormous pressure that young women are placed under in terms of looking a certain way. And being cute in a certain way. ... And is your hair done the right way," he states in the video. "And that pressure I think historically has always been harder on African American women than just about any other women. But it's part and parcel of a broader way in which we socialize and press women to constantly doubt themselves or define themselves in terms of a certain appearance."

He also states "I do think that culture's changing for the younger generation a little bit more," he says. "You see Beyonce or you see some of these pop stars and what both white, Latino, black children are seeing as representative of beauty is much broader than it was when I was a kid. You just didn't see that much representation. And that's healthy and that's encouraging. But it's still a challenge. I mean Malia'll talk about black girl's hair and will have much opinions of that. And she's pretty opinionated about the fact that it costs a lot, it takes a long time, that sometimes girls can be just as tough on each other about how they're supposed to look. And so it's, as a parent, that's a constant learning process that you're trying to hold the fort."


He also adds that he appreciates the strong role models like Misty Copeland who have had a powerful presence on social media---which she acknowledges is playing a big part in helping young black women break free of historical pressures regarding their appearances. "It's so important for this generation," she says. "And to use social media to have a positive impact on our generation is huge. ... But to have movements like #BlackGirlMagic, I think it couldn't be more positive for a young black girl to see that it's okay to be yourself, it's okay to not have to transform and look like what you may see on the cover of a lot of magazines. That you are beautiful, that it's possible to succeed in any field that you want to, looking the way that you do. With your hair the way it is. I think all of that is so extremely important and something that I'm constantly celebrating. That something that I fought so hard for throughout the beginning of my career is I didn't want to pancake my skin a lighter color to fit into the…ballet. I wanted to be myself. I didn't want to have to wear makeup that made my nose look thinner. There are just—it's important I think with this generation of young minorities, children especially, to feel comfortable and confident in their skin."

Wow…It is great to hear President Obama opening up about a subject so close to women, especially African American women. And, it is indeed wonderful to have Misty Copeland as a role model, encouraging young women to be confident being themselves.

Diane von Furstenberg: 9 Beauty Rules Every Woman Should Know Before She Turns Her “Best Age”