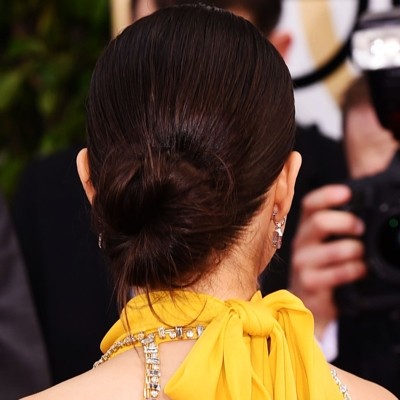 Hollywood is known for leaving nothing off the table in the name of beauty. Case in point: the non-surgical "hair facelift."

What is it exactly? According to an article by Refinery29, the "hair facelift"can do one or all of these things: tighten the skin on the face, make hair appear fuller and thicker and fill in an uneven hairline.

1: Tightening the Skin on the Face
Celebrity hairstylist Andy Lecompte explains how to give the appearance of a real facelift—"You can take the bit of hair from behind the ear, braid it, and pull it back to fake a proper facelift. Then, you pin in it together in the back (under the top layer of hair). You can lift the braids up to do the neck or eyes too."

Jen Atkin, the top celebrity hairstylist behind the Kardashian/Jenner manes, also uses this technique. "The tension from the braids can definitely help tug on the skin, creating a tighter and slightly-lifted look".

According to Atkin, this trick works well on ponytails too. "A sleek ponytail is a super chic and strong look that can totally make you think you got an instant facelift. To get the hair as smooth and sleek as possible, you really have to tightly comb the hair back and secure it with a hair bungee. This will pull the skin on the face back with it, making your face feel tighter and lifted."

2: Make Hair Fuller & Thicker, Fill in an Uneven Hairline
Adding a bit of powder on the hairline (that matches your hair color) is another stylist trick to fill out the hair or lessen a widening part.

Atkin explains, "This is an old-school tip that makes hair appear fuller in photos. This is especially useful on updos, braids, or sleek looks. If the hair is pulled back and there is some exposed scalp, it can be distracting and can be a dead giveaway of a spray tan." She explains further, "I use a tinted powder on nearly all of my clients," Atkin says. "It’s basically like eyeshadow for your part."

Atkin also makes the trick sound easy…."I’ll just dab a little powder on it to fill it in. This is also great for filling in hairlines, as no one has a perfect hairline." How true is that!

Get the specific hair powders recommended by the above stylists on Refinery 29.

Did You Just Use Too Much Hair Product?